by Robin-HiFi
in News
Home News 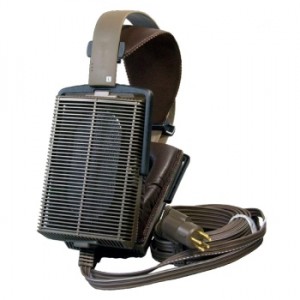 Founded in 1938, originally manufacturing high frequency condenser microphones and later Record Player cartridges, in 1960 STAX launched the Electrostatic Earspeaker with the STAX SR-1 and has been building amazing headphones ever since.

Electrostatic drivers consist of a very thin electrically charged diaphragm, typically stretched and coated polyethylene terephthalate (a unique STAX polymer formula) is used for its high tensile strength to create the membrane. This is suspended between two perforated metal plates (the electrodes), when an electrical sound signal is applied to the electrodes, creating an electrical field, the diaphragm is drawn towards one of the plates depending on the polarity of the field. Air is then forced through the perforations, when combined with the continuously fluctuating electrical signal driving the membrane a sound wave is generated.

Due to the extremely thin diaphragm membrane, which is only a few micrometers thick, the frequency response of electrostatic headphones usually extends far beyond the normal human hearing range of up to 20kHz. The high frequency response means that the low mid band distortion level is maintained right to the top of our audible frequency band. The peaks regularly seen in higher frequency regions with moving coil drivers is almost completely absent with the result being much more stable and accurate sound reproduction.

Electrostatic headphones are powered  by a special amplifier that is required to create the signal to deflect the membrane and needs electrical potential in the range of 100 to 1000 volts, these are often referred to as energisers. With this amount of power in proximity to a user’s head the usual method of making this safe is to limit the possible fault current to a low value with resistors.

Well, they sound great! Fast and fluid with superb separation – it is this separation of the instruments which really provides the difference between dynamic headphones and Electrostatics. You have the same sense of space normally associated with open backs but each instrument really feels contained in its own bubble, the incredible detail gives the sharpest image that seems vivid and realistic, strangely natural in its lack of grain. The precision of the sound, their natural airy feel and the sculptural solidity they give to instruments lends itself to Classical music, Vocal and Choral music, Folk and Acoustic and Jazz. Classic Rock and Pop mostly work well but the Contemporary love of heavy limiting and compression means many recent recordings have too little space and punch too hard to take advantage of the subtlety on offer. 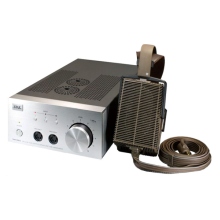 This is the biggest shake up of the STAX range for a very long time. New features include –

Classic System SRS-3170– This is a standard combination of SR-307and SRM-323S with all-stage direct-coupled balanced output. The SR-307 has a completely new diaphragm, now sharing more features with the Signature System there has been a fundamental change of specification, low capacity PC-OCC cable, gold plated terminals and open air enclosure all appear in the Classic System.

Headphones for watching TV for the hard of hearing

Latest Final UX3000 Reviews are in!

Headphones for watching TV for the hard of hearing